This study was conducted in accordance with the Declaration of Helsinki and the experiments were conducted with ethics, human rights and personal data protection in mind. This study was approved by the Osaka Kyoiku University Ethics Committee (approval number: 21051). All participants signed a written informed consent form prior to participating in this study.

Study participants included university students attending physical education classes on campus. So they were physically active. Inclusion criteria were as follows: Participants were at least 18 years old, fully understood the experiment, and gave written informed consent to participate. We recruited participants through recruiting within the university and as a result they were young. Exclusion criteria were a history of cardiac disease, current arrhythmia, chest pain, exertional pain, and a history of respiratory disease. Forty people attended an information session. Before starting the study, the purpose and possible risks were carefully explained. Then, 16 participants who volunteered to participate answered questions about their history of respiratory and cardiovascular disease using the Physical Activity Readiness Questionnaire19. All participants were non-smokers and had no medical history. Sample size was calculated using G*power 3.1, based on a previous study, assuming VO2peak 32.2 ± 9.0 and 43.9 ± 8.1 ml/kg/min with and without cloth face mask20 with a significance level of 5% and 90% energy. Therefore, it was estimated that eight participants would be required.

To achieve this goal, 11 healthy young men underwent an incremental treadmill exercise test to exhaustion with and without cloth face masks. A randomized crossover design was used in this study. All participants underwent an incremental treadmill exercise test to exhaustion under two conditions: with a cloth mask (CFM) and without a mask (CON) in random order. Each test was performed on a separate day in a random order and at least 48 hours apart. To minimize daily variability, both test conditions were performed for each participant at the same time of day within a 2-hour time difference. Participants were briefed on the experimental procedures and practiced the testing protocol 1 week prior to the study to become familiar with the equipment and practice protocol. After acclimatization, the participants were randomly divided into two groups and subjected to the first running test. The second test was carried out under different conditions than the first test (Fig. 1). Participants were instructed not to consume caffeine or alcohol and not to engage in heavy exercise for 24 hours prior to the test. On the test day, the participants’ height and weight were measured and voluntary stretching exercises were performed. This was followed by a 3-minute warm-up by walking on a treadmill (3.0 km/h with 0% incline). After the warm-up, participants attached a disposable expiratory mask (601M, ARCO, Chiba, Japan) that was connected via tubing to a mass spectrometer sensor for expiratory gas analysis. Six ECG electrodes (Vitorode M-150, Nihon Kohden, Tokyo, Japan) were attached to measure cardiac output (CO). To avoid falls, the participants were equipped with an upper body harness. Then the test was started and the participants had to rest for 3 min before starting the exercise in order to measure the resting values. The experiment was conducted in October. The room temperature was controlled with an air conditioner; nevertheless, the room windows had to be opened in accordance with the university’s COVID-19 prevention guidelines. The room temperature for all tests was 25.0 ± 0.5 °C. 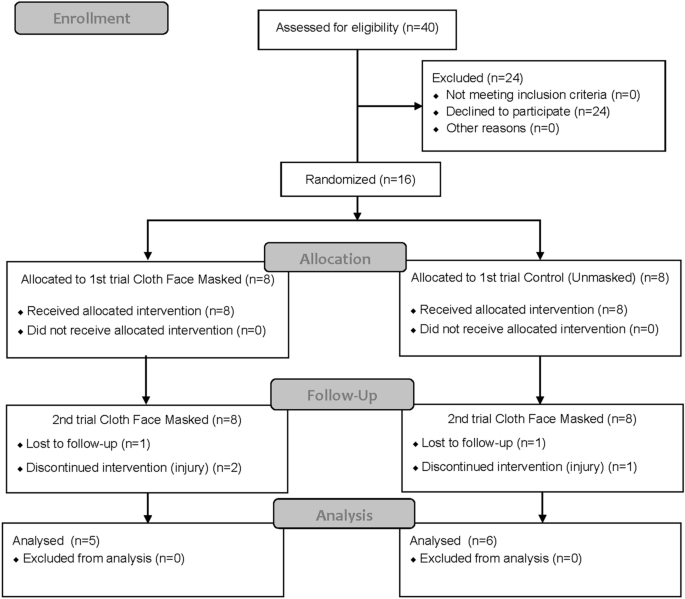 CONSORT flowchart. The chart shows how many people were screened and completed under two condition trials.

In the CFM state, a cloth face mask (DESCENTE Athletic Mask, DESCENTE, Osaka, Japan) was used (outer lining: 100% polyester, inner lining: 98% polyester, 2% polyurethane). Rizki and Kurniawan21 reported that cloth face masks can filter the air to some extent and polyester cloth face masks provide the most efficient filtration. Therefore, the cloth mask used in this study was expected to prevent droplet dispersal to some extent. After the face mask was in place, an expiratory mask for gas analysis was placed over it and fastened with ties to prevent gas leakage. Prior to the start of the test, participants made expiratory efforts until a positive mouth pressure of 50 cmH2O was detected to check for any gas leaks. Positive pressure was generated by closing the gas line outlet connected to the expiratory mask (601M, ARCO, Chiba, Japan) with the hands. Leakage was carefully verified by auditory, sensory, and visual inspections (e.g., whether the mask was raised and whether air was flowing from the side).

The Bruce treadmill protocol22 was used for the graded exercise test. We adopted the Bruce protocol because several previous studies6,8,20,23 used it in their treadmill exercise tests. Treadmill speed and incline were increased every 3 min after the onset of exercise until fatigue was reached (Table 1). Fatigue criterion was the point at which the participant could not maintain running speed and fell > 0.8 m. The participant was verbally encouraged during the exercise.

Respiratory and metabolic responses were continuously measured during exercise by analyzing expiratory gases with a mass spectrometer (ARCO-2000N, ARCO, Chiba, Japan) connected to an expiratory mask via silicone tubing. Maximum oxygen uptake (Vo2), carbon dioxide elimination (Vco2), tidal volume (VT), respiratory rate (fR), minute ventilation (VE), alveolar ventilation (VA), VE /Vo2, VE /Vco2 and end-tidal partial pressure of Co2 (PETCO2) were measured. The mass spectrometer was calibrated with two gases (ambient air equivalent O2, 20.93%; CO2, 0.05%; N2, rest and expired gas equivalent O2, 13.0%; CO2, 5.01%; N2, rest). To ensure that Vo2 reached the maximum, participants met at least three of the following criteria: (1) a respiratory exchange ratio of ≥ 1.10 (43% of the studies), (2) a heart rate (HR) that was 90% of the achieved age-predicted maximum heart rate (220-age) (100% of studies), (3) rate of perceived exertion (RPE) of > 16 (100% of studies), and (4) participant was unable to continue exercise (100% of trials). (5) The Vo2 plateau: A Vo2 plateau was the deviation from the extrapolated Vo2-time linear regression using 30 s data (the actual value was < 400 mL/min from the extrapolated value)24 (50% of attempts). All parameters were averaged every 60 s for analysis.

Oral pressure was measured by attaching a catheter-tipped pressure transducer (MicroSensor Basic Kit, Codman & Shurtleff, Inc., MA, USA). The catheter was covered with a plastic tube (diameter: 4 mm, length: 250 mm) and fixed with surgical tape from the bridge of the nose to the tip of the nose to prevent the mask from touching the sensor portion at the tip of the catheter. When wearing the face mask and expiratory mask, it was confirmed that the tip did not touch the skin or mask. The pressure transducer at the catheter tip was calibrated by immersing the catheter in a light-shielding tube filled with warm water (37°C) to a depth of 0-60 cm before the experiment to obtain a calibration signal. Mouth pressure was recorded on a laptop (Dynabook EX/55, TOSHIBA, Tokyo, Japan) at a sampling frequency of 200 Hz via an AD converter (PowerLab 8a/d, AD Instruments, Sydney, Australia) and analyzed with waveform analysis software (Lab Chart ver. 7, AD Instrument, Sydney, Australia). The absolute values ​​were integrated from the obtained mouth pressure data and used as ∫Pm.

This study was conducted in accordance with the Declaration of Helsinki and the experiments were conducted with ethics, human rights and personal data protection in mind. This study was approved by the Osaka Kyoiku University Ethics Committee (approval number: 21051). Participants signed a written informed consent form prior to participating in this study.