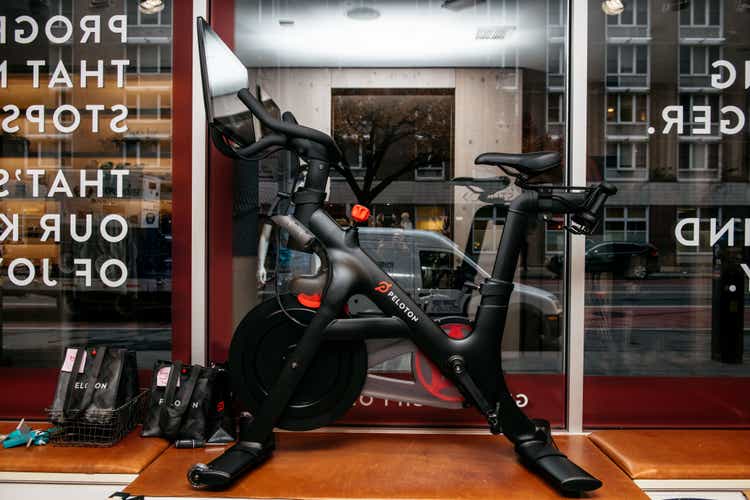 When the third quarter results came out, media and minority investors immediately slammed Barry McCarthy, Peloton’s new CEO, for being unable to stop the cash bleeding. The truth however is that he had little time to do anything. From the day he assumed his leading position, to the day the Q3 period came to an end, only 1.5 months had passed. What did everyone expect? Magic?

What the relevant results mirrored was Foley’s legacy. An ever expanding inventory, a $400 million Ohio investment plan (cuts were made when McCarthy took over), a surreal stock based compensation schedule (for a company about to run out of money), a level of cash burning that would have inevitably ‘kneeled’ Peloton it in just a couple of quarters… There was no touch with reality. The company would have faltered right about now if McCarthy hadn’t taken over.

Peloton managed to receive a $750 million loan thanks to McCarthy, who understands numbers (being an ex-CFO and all) and knew how to talk to bankers. That is in my opinion pretty much why $1.5 billion were offered, albeit at a ‘salty’ interest rate, but with inflation currently benefiting borrowers, unless the FED keeps hiking rates at a faster pace in comparison to inflation. Of course, bankers know that they have bankruptcy priority over shareholders.

The graph above reveals that Peloton is running out of options, since the Debt/Asset ratio is already above 50% and that is for a CAPEX intensive company that has a deteriorating gross profit margin (although the App relevant margin can change that). So, banks will be very reluctant to further inject borrowed funds into the company, especially since goodwill and other non-liquidable assets are a part of the balance sheet.

Diluting shares at current price levels would be a disastrous course of action and banks should push against it since they need to stabilize the company’s market value (a collateral to their loans).

The biggest red flag however was made public by McCarthy himself during the Q3 call. On the one hand he stated that the company was still after the “mass market target” (one bike in every home), while publicly (!) revealing that Peloton needs to expand internationally to bring back growth, but that “this requires money we don’t have”. How contradictory is that?

Why did McCarthy become CEO?

McCarthy is a veteran CFO who assumed the position of a CEO. The first question that comes to mind is “why in particular was he chosen to lead Peloton”? The simple answer is “Wall Street and Foley”.

Wall Street’s main objective are “good numbers” that have the potential to boost the stock price, often times at the expense of a sustainable long-term strategy. Peloton (NASDAQ:PTON) will not be the exception to this requirement, making a CFO the ideal choice in the case of a financially burdened company with a loyal clientele.

When it comes to ex-CEO (and co-founder) Foley, a closer look at the current board of directors reveals that the company remains under his control. The board still “contains” the three founders, the lawyer (Kushi), the products designer (Cortese) and the businessman (Foley). Foley, together with his closest “allies”, also maintain majority voting power.

So, in short, the company is still run by Foley (in part at least), while McCarthy was picked to please Wall Street and the banks (including private lenders) Peloton depends on to survive.

The time is ticking. McCarthy is tasked with the almost impossible, to stabilize the cash flows in just 2-4 quarters. In order to extend this period, he would have to reduce outflows significantly within the first two quarters.

On the Pro side, McCarthy wants to succeed because he perceives this as a lifetime opportunity. He probably always wanted to be a CEO, but never quite got there. Now he did. And based on his past, he seems to be a realist and knows how to gain the trust of banks.

Unfortunately, McCarthy only has experience with low-CAPEX-intensive businesses. Peloton has hardware and an inventory. Spotify and Netflix, the businesses that he worked for in the past, are (almost) purely software based. Margins and operating expenses are easier to manage for those type of companies.

This is by the way why we should not compare the Netflix (NFLX) debacle with Peloton. You see it’s easy to move away from one streaming platform and into another and then back. But when someone invests over $1,000 on a piece of hardware, he/she will want to make the most of it. And this translates into a much higher loyalty rate for Peloton.

What this also means, is that McCarthy’s “rent a bike” service (currently being tested), could deteriorate high loyalty rates in the future (no one would have to buy hardware anymore), further damaging the company in the longer term. In the short term however, revenues would increase, giving investors the false impression of a return to sustainable growth.

McCarthy’s non-athletic style could also negatively impact the firm. Yes, it matters. The CEO is the face of a company, not just on Wall Street but also on Main Street. He needs to reinforce the company’s image, much like Elon Musk does for Tesla (TSLA), with his crazy scientist/savior of the world style. Foley, at the very least, had the Californian non-bulky athletic vegan style going on (my subjective impression).

Back in 2016, when McCarthy still was a CFO, he was quiet confident in his interviews because he was not the “face of the company”. Now that he sits on the Kings seat, he’ll be constantly “attacked” by media, investors, and clients. He will need to present products and “put out fires”, all while still doing his job well (the day to day). At his age, being confirmed as head of a severely troubled and trending company can be particularly hard. That weight has been quite evident in his recent interviews.

I guess we should cut him some slack. After all, he just got the job. But can we blame Blackwells for wanting a quick sale sooner rather than later? I bet the stake gone on sale is meant to give Blackwells a way out. McCarthy doesn’t like to waste time on lost causes, as has become evident by how fast he settled the patent dispute with iFit (the company behind competitor Nordic Track).

Can a veteran CFO be a good CEO?

In order for us to ‘decide’ if McCarthy is the right fit for Peloton, we must first understand at what stage the company is at and what type of management it needs.

It is my opinion that the company has been forced to curb its ‘real’ expansion capacity because it was mismanaged. The business was moving away from strictly focusing on home equipment and instead invested funds into brick and mortar. It could have used these funds to expand its product line (equipment types) and invest in in-house app content (classes and music) rather than outsourcing it still. But let’s take a bit of a closer look:

So, if management decided to focus only on home fitness equipment, redirecting cash from brick-and-mortar initiatives (as well as cash savings in the form of inventory stock) towards adding additional product types into the line, there might be a long-term future ahead. The situation becomes much more complicated if cash flows are not properly managed, because Peloton will not have any money to invest into expanding the business – something that McCarthy acknowledged in his Q3/22 call.

Based on the above then and the ‘stage’ the company is at (expansion), a CFO at the helm risks ‘stalling’ growth prospects in the long term. A CEO would normally have to build the foundations (“infrastructure”) that make a business attractive to long-term investors. Cutting back on development, R&D, branding and product expansion, is going to cripple Pelton’s future prospects – although to be fair, the company ‘announced’ it was expanding its product line a bit.

Volatility will most likely remain high in the mid-term as cost cuts and testing initiatives will quickly alter financial statement balances, which is ‘food’ for short-term traders. This could effectively make the company uninvestable for institutions like pension funds, which lack the tolerance towards violent price swings. Banks will also not like this since they give out loans while having shares as collateral value in mind.

We of course could argue that McCarthy, being a human, is not a linear personality, but rather a dynamic one, that can adapt to new challenges. But at his age this is less likely to be the case – yet not impossible. So, in that spirit, here is what we need to track over time, in order to see if McCarthy is able to steer the company into a future or towards a rocky shore:

So, all and all, Peloton is not a buy but rather a hold. Selling at such low levels is also not advisable – a rising tide lifts all boats. But its CEO is against some very negative odds: The Company does have growth potential but has no cash to invest (in fact it is running out of it) and the current environment is ‘hostile’ towards expansion.

If Q4 reveals no signs of stabilizing cash flows, if the war has not come to an end (a ceasefire at least) and if China lockdowns have not been lifted (in major cities at least), even an OPEC deal to increase oil output to bring down energy prices will not be sufficient in dealing with inflation/rates alone.

There are indeed better opportunities elsewhere, with less risk at least, unless you think McCarthy and Foley are willing to privatize the company by selling it above market price. Nevertheless, if the above milestones are met, Peloton can have a good long-term prospect (I would definitely like to own a piece of the company at some point). I am not sure though that McCarthy will stay as CEO after milestones 1 and 2 have been met.