How elliptical trainers took over the health world 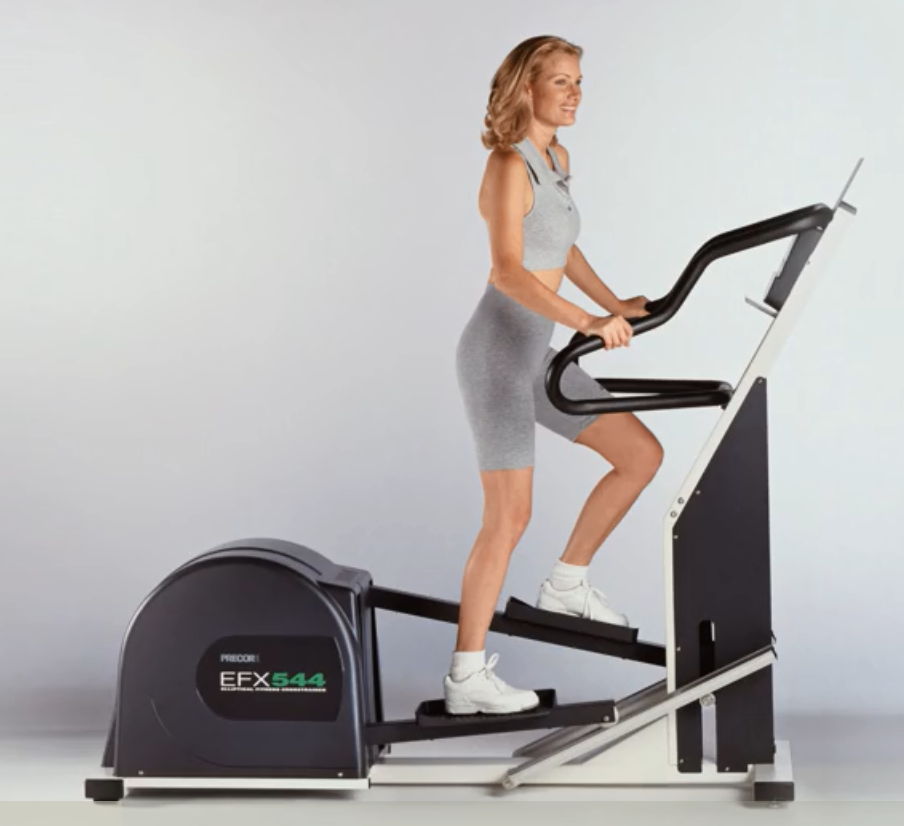 In 1997 we stopped just walking, running and cycling for exercise and instead started training on the newly created elliptical trainer that combined all three – and then some

2022 marks the 25th anniversary of the year it all happened — 1997. It’s been a deafening, Pierce Brosnan-loving, comet-obsessed world, and we’re here to relive every minute of it. Twice a week for the next 12 months we’ll take you into the winter of sheep cloning and the summer of con air. Come to the Chumbawamba and stay for the return of the Mack. See all stories here.

Little did technology whiz Larry Miller know the seismic change he would unleash in the training world when he began tinkering with plywood, scrap parts and in-line skate wheels at his home in Rochester, Michigan in the mid-1990s. “I wanted something that you could really do for half an hour or an hour at a time and that wouldn’t put a lot of shock and stress on the body,” the former General Motors Human Factors engineer told the Miami Herald in September 1997. I went jogging for a while but didn’t really enjoy it because it was pretty rough on the body. I sort of gave that up, which I think was part of the motivation for that.”

“This” referred to the prototype of what would eventually become the modern day elliptical trainer. Precor was so impressed with Miller’s creation that in 1995 they acquired the rights to the prototype and designs and agreed to pay him royalties on future sales of the resulting products – the first of which was the Precor EFX 544.

Early reports of this new “elliptical climber” – as it was dubbed in a January 1996 issue of the Chicago Tribune – lumped it together with treadmills, bicycles, step machines, rowing machines and ski machines. But early advertising for the elliptical focused on its hybrid nature and portrayed it as a clear rival to virtually every other form of cardio. To that end, a pre-holiday calorie-burning guide in The Journal News in November 1996 described that the elliptical is capable of simulating cross-country skiing, stair climbing, running and cycling in one fell swoop.

The elliptical trainer comes to the gym

Shortly thereafter, health club owners and employees gave testimonials expressing how popular the elliptical trainer was becoming with members. “It’s really an incredible piece of equipment,” Wisconsin gym owner Laurie Tackett told the Wisconsin State Journal after purchasing two elliptical trainers for her members. “I was really impressed by it. The reason why we think it is beneficial is that it combines three types of machines in one piece. It’s a smoother angle, which means a lot of people with bad backs and knees can use it because it has no impact.”

Several gym-goers quickly searched for elliptical trainers for personal use at home, resulting in an immediate back-order of units. The Argus Leader reported in April 1997 that the hot new device was so popular that people were willing to pay $3,900 for the commercial model, even though those designed for home use, which cost $1,200 less, would be available in just a few months would .

To get into the elliptical craze, NordicTrack (the Ellipse) and Reebok (Body Trec) launched a couple of their own “total body” machines. Endorsed by NFL wide receiver and track and field champion Willie Gault, the Ellipse combined the smooth, rolling foot pedal action of an elliptical trainer with the cross-country handlebars of several of the gliders sold at the time. The Body Trec did the same thing, except its pedals ran on a front-wheel drive system that was able to elevate much like the Precor and didn’t leave room for long strides.

As the rear-drive design caught on as the elliptical trainer, it strengthened the relationship between cross-country skiing and elliptical running and provided the complete cross-country ski emulation model that would define the elliptical trainer. Basically, the Ellipse and Body Trec made it so that any upright pedal design — handled or unmanaged, flat or incline, front-wheel drive or rear-wheel drive — can now be called an elliptical. Willie Gault on the NordicTrack Ellipse

But there was a problem: When the first home-use elliptical models finally reached guest rooms, garages, and basements, not everyone believed their new machines sufficiently mimicked what they had experienced at the gym. Elliptical trainers that were both effective and inexpensive were hard to come by – especially those priced at $500 and under. Additionally, the expanding definition of an “elliptical trainer” had resulted in a deluge of elliptical products flooding the market, and many of them lacked the stability and functionality of the industrial-grade options.

“The trainers give you a good cardiovascular workout, but since these machines are quite complex machines, it seems difficult to build a quality, inexpensive version,” exercise physiologist Richard Cotton told the Gannett News Service in 1998, a member of Gold’s Gym told the Decatur Herald and Review in 1999, “I recently went to a club that had eight cross-country ski machines that were unused because people thought they were too difficult to operate. People want machines they can use correctly the first time.”

Still, elliptical trainers were still touted as the next big thing in home fitness equipment sales as the number of club users had increased from 2.4 million in 1997 to 6.2 million in 2000 and continued to rise steadily, according to the Sporting Goods Manufacturers Association.

By 2003, every major fitness player was in the elliptical trainer business. Even Chris Clawson, Life Fitness’ future CEO, conceded in an interview with The Southtown Star that the company’s flagship product, which he designed himself, the LifeCycle bike, rose from its best-selling position to third overall, behind treadmills and Life Fitness elliptical trainers. “Our first elliptical cross trainer was in 1997,” said Clawson. “It was developed in response to an unmet need: people wanted to train their entire body, upper and lower, together.”

At the end of the study, Reuters reported that treadmills accounted for more than half of all fitness sales in 2009, while elliptical trainers came in second at 8.4 percent. However, that represented 27 percent year-over-year sales growth, and analysts predicted that the “silver tsunami” of baby boomers would soon shift to elliptical trainers as a form of low-impact cardio. “You have to keep up with a treadmill or you’ll lose your step,” exercise science professor Henry Williford of the American College of Sports Medicine told the news outlet. “Whatever speed you set, you have to keep up. With an elliptical trainer, you can rest or slow down.” In this regard, a 1998 report by the Consumer Protection Agency cited more than 70 cases of people suffering injuries falling off treadmills. In comparison, elliptical trainers allowed their users to safely watch TV while pumping without ever worrying about falling to the floor.

Today, elliptical trainers continue their long climb to the top of the fitness sales chart and now hold about 30 percent of the cardio equipment market. (Treadmills are still number one at 50 percent.) While the popular adage goes that if you can’t beat them, join them, the elliptical has shown that it can effectively beat all “they” — stationary ones Bikes, stair climbers and elliptical cross trainers – bringing together all their best features and eliminating their unpopular elements.

The elliptical trainer may never surpass the treadmill in general popularity as walking and running will always be the primary ways of moving around the world. However, with its marketing focus on nothing more than pure calorie burning, the elliptical has proven that there’s a big market for products that help people who just want to get fit for the sake of fitness, not because they necessarily want to be bigger and stronger or faster in any measurable way.

Ian Douglass is a volunteer firefighter, sloppy Concept2 rower, and SkiErger, and is the worst All-American swimming champion of all time. He also helps professional wrestlers get their autobiographies published, helps businessmen write coherent thoughts, and has overrated Michigan and Northwestern degrees.