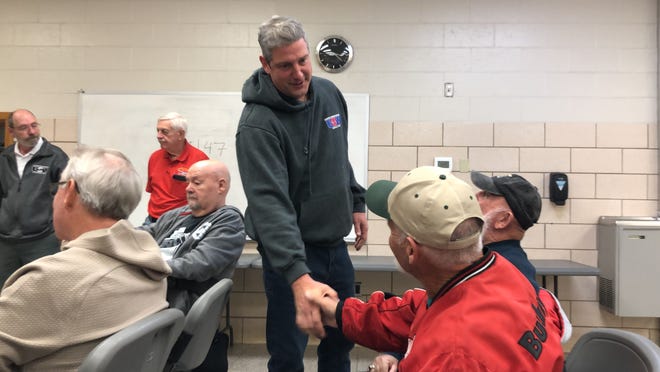 CANTON — In less than two weeks, the final votes will take place on whether Congressman Tim Ryan will be elected Senator from Ohio.

Ryan, D-Warren, put aside his campaign speech and talking points Friday afternoon to hear Hoover Co. retirees lament the impending loss of their Whirlpool life insurance benefits. Ryan is up against Republican nominee JD Vance for the Senate seat, now held by Republican Rob Portman, who is not seeking re-election.

The 60 or so older retirees from the 13th Street SW Plumbing Training Center who were invited to a round table with Ryan, many of whom greeted him with applause, seemed uninterested in hearing Ryan’s positions on these issues. They wanted to know what he could do to help them keep their benefits after losing their health insurance in 2013.

Jim Repace, past president of the International Brotherhood of Electrical Workers Local 1985, briefed Ryan on benefits Hoover retirees had lost over the years after the congressman arrived just before 3 p.m. At one point, Ryan, who was standing next to Repace, sat down in the front row to listen to him for more than six minutes.

Repace said for retirees’ families to receive life insurance benefits, Whirlpool said, “You all have to die by January 1st.”

Many of the roughly 625 remaining Hoover retirees had recently received a September letter from Whirlpool. The company assumed many of the union benefit obligations when it acquired Hoover’s parent company, Maytag, in 2006. Whirlpool sold Hoover to Techtronic Industries shortly thereafter.

The letter said Hoover’s retiree life insurance coverage would be canceled effective later this year. Retirees would be able to purchase life insurance through MetLife at their own expense without having to prove insurability.

Repace said Whirlpool is committed to offering lifetime life insurance. The letter does not state the reason or basis on which Whirlpool terminated coverage.

Ryan then took to the podium and said: “At this particular moment, there’s nothing I can do but say I’ll definitely look into this. Which sometimes works and sometimes doesn’t.”

Ryan said for a company to wriggle out of its obligations to retirees, “It’s fundamentally unfair. … I will have a letter from my office (to Whirlpool) by Monday asking many questions.”

The congressman said he would try to get Sen. Sherrod Brown, D-Cleveland, to join him in his efforts to get the answers. But Ryan said he couldn’t make any promises about whether it would yield results. He said he supported legislation so that if a company went bankrupt, its workers and retirees, who were promised benefits, would be at the forefront, not behind, of creditors demanding their payment.

Ryan later said, “I know this is hard for some people, but it’s not about me. It’s about her. And they suffer. So we will listen. Then we will try to help them.”

Hoover union executive committee member Dan Hiner said: “I hope something can be done. When you get knocked down so often, you lose hope.”

In 2019, a 6th Circuit Court of Appeals ruled 2-1 that the retirees were not eligible for lifetime health insurance coverage, overturning a US District Court ruling.

The congressman discussed some of his campaign positions during a six-minute interview after shaking hands with participants.

Ryan was riding his red campaign bus with the slogan “Made in Ohio” about 50 minutes after arriving. Put Workers First”.

Retirees were skeptical about what could save their life insurance benefits.

“Same old story,” said Hoover pensioner Curt Ongenecker, 78, of Nimishillen Township. “They always talk, but they do nothing.”

Betsy Hanson, 72, of Jackson Township, who worked at Hoover for 37 years, said she was glad Ryan came.

“I hope he could really do something,” she said. “We gave up money at the time of the contract so we could receive benefits.”

However, Hanson said Ryan would not get her vote because she had voted for almost every Republican candidate since voting for Ronald Reagan for president in 1980. And she was opposed to the extent of liberal-backed welfare programs that took taxpayer money from her to give to others.

Kate Steed, 75, of Canton, who worked at Hoover for 36 years, planned to vote for Ryan as a senator.

Reach the repository at [email protected] On Twitter: @rwangREP.

Business Refrigeration Market Dimension in Europe to develop at CAGR of 5.9 by way of 2027 | UK rising at a CAGR of three.3%