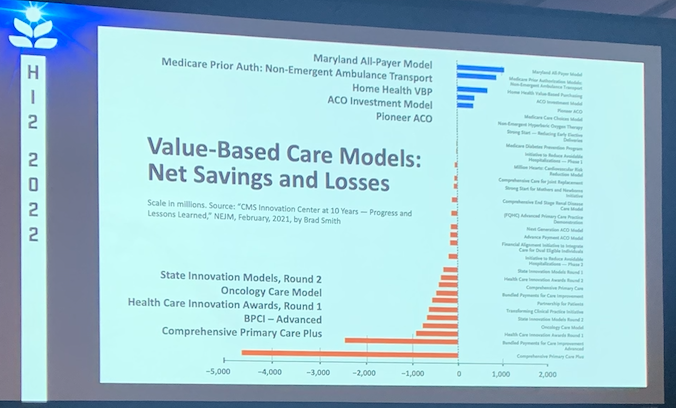 Former administrator of the US Centers for Medicare & Medicaid Services (CMS), Seema Verma, did not paint a rosy outlook for the home healthcare industry in Chicago this week.

In fact, hardly anything she said elicited optimism from the operators in the crowd.

Regarding the economy, she said it was her guess that a recession was just around the corner, although she acknowledged it wasn’t her job to predict such things. Referring to legislation that was passed in Washington, DC this year — maybe even favorable home care legislation — she said she “didn’t see it happening.” And when it came to home health nitty gritty and last week’s proposed rule, she told providers to expect the rebuttal will be an uphill battle.

She offered perspective on how the rule will be set, noting that operators can direct their anger at the system as of now, but not necessarily at the CMS as a whole or at any of the people who currently make up the administration.

“I think in this case — in this case and in any case — you’re looking at it very short-sightedly, right?” Verma said at Lincoln Healthcare’s Home Care Innovation and Investment Conference on Wednesday. “That means they look at the expense reports or look at what the data says.”

CMS released its proposed fiscal year 2023 payment rule late Friday, which included a 4.2% reduction in payment rates, or $810 million less, compared to 2022 rates. The National Association for Home Care & Hospice (NAHC) said in response that “the stability of home healthcare is at risk.”

The agency knows there is a coding intensity factor in the Patient-Driven Groupings Model (PDGM) that ultimately lowered rates, Verma said.

“They actually said, ‘Okay, there’s an increase that we’re recommending, but that’s offset by the new implementation of the model.’ And the idea was that there will be behaviors that would potentially encourage vendors to increase coding intensity,” she continued. “Whether that’s true or not, I don’t know.”

Verma also acknowledged that since the outbreak of the COVID-19 virus, it has become difficult to interpret data, another sign that CMS’ proposed rules methodology could be inherently flawed.

The obvious caveat, however, is that it’s still just a proposed rule and there’s an opportunity to sway it during the comment period.

But that won’t be easy. Just as CMS developed the proposed rule solely using data, according to Verma they will only be influenced by data.

What was perhaps even more disheartening was Verma’s further offer to take a look behind the scenes, recognizing the fact that the price setting system at CMS is very isolated and isolated.

Joanne Cunningham, CEO of the Partnership for Quality Home Healthcare, pointed this out to Home Health Care News on Wednesday.

“On the one hand, CMS is proposing some sizeable reductions, not just in 2023, but in the years thereafter,” Cunningham said. “On the other hand, the [Home Health Value-Based Purchasing Model] is to be extended to all 50 states from 2023. CMS forecasts that Home Health will deliver [millions] while saving [due to] avoided hospital admissions, readmissions, and so on. To me, it’s a bewildering dichotomy that I find in tremendous conflict.”

HHVBP is one of the few big savers among the CMMI models. Source: Lincoln Healthcare

But Verma reiterated that this nuance is not part of the calculus for CMS.

“I don’t think it’s going to be enough to say, ‘The services we provide actually have downstream impacts,’ which is true,” Verma said. “If we do a really good job in home health care, we can prevent hospital admissions and keep people out of care homes…but that’s not how they think about it.” It’s very short-sighted when they just look at one industry and they don’t really have the authority to look at it that way.”

Home healthcare operators are rightly concerned about the issues in their own backyard right now, namely the proposed rule, which HHVBP has also failed to streamline despite the provider’s rejection.

But they also hoped for a positive legislative impetus. For Medicaid-based homecare providers, optimism about Build Back Better’s momentum was for naught.

Medicare-based homecare workers were still hoping that the 2021 Homecare Choice Act could take effect by the end of the year.

“I wish I could say something was going to happen, but I don’t see it,” she said. “We’re sitting here in mid-June. And it’s an election. Usually after August everyone is back in their districts campaigning. So if something is going to happen, it has to happen relatively quickly, and we’re just running out of time.”

The issue of reimbursement for telemedicine at a fair rate for home health care is also unlikely to be resolved anytime soon, which Verma said she was “disappointed”.

“[CMS] just sees it as an increase in occupancy,” Verma said. “And you know, honestly, I’m surprised and disappointed that they didn’t work on it. Because we are talking about expanding dental services. We’re talking about expanding vision, and those things are being provided [Medicare Advantage]. But telemedicine, that would be a real tragedy if it didn’t continue.”

And while home care providers generally like to describe themselves as “recession-proof,” a bad economy doesn’t usually bode well for anyone.

This threat of recession was Verma’s last prediction.

“I’m not an economist. I’m just a health policy freak. But I think that’s where we’re headed,” she said. “This time it’s a very different environment with so many things in the supply chain at play. … So, you know, it kind of seems inevitable.”