Fiore calls Conine’s work with the state board ‘questionable enterprise’ 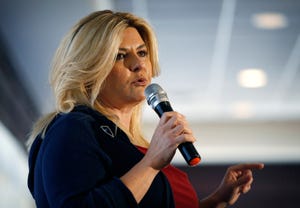 Republican nominee Michele Fiore, who is running in November to be Nevada’s next treasurer, has accused incumbent Zach Conine of secretly running a “shady” private company from “the same office that manages Nevadans’ public funds.”

“I look forward to Conine rectifying this omission by offering me, as his political opponent and the people of Nevada, an explanation for this suspicious and underhand behavior that falls outside the bounds of the law,” Fiore said in a statement released Friday morning Explanation.

The business in question? The Nevada Capital Investment Corporation – a state entity under the umbrella of the Office of the Treasurer for which Conine, as Treasurer, is required by state law to chair the seven-member board of directors of the public corporation.

If Fiore defeats Conine in the midterm elections in November, she too would be required by law to sit on the same board.

NCIC is an equity fund that uses a portion of non-taxpayer dollars from the state’s permanent school fund to invest in education and businesses in Nevada. It was established a decade ago after the Nevada Legislature passed Senate Bill 75, which was signed into law by the then-governor in June 2011. Brian Sandoval.

“Michele Fiore is the most comprehensively unqualified major party candidate for constitutional office in Nevada history,” the statement continued, “and her failure to understand the job she is asking of Nevadans underscores this sad truth.” .”

Fiore’s allegation, made public by her campaign, was prompted by a report of electoral integrity violations against Conine filed with the Nevada Secretary of State’s office earlier this week.

The complaint, filed by a private individual, alleges that Conine failed to disclose NCIC as one of its companies on its 2020 annual candidate financial disclosure form. (The Secretary of State’s office on Friday did not respond to a request for comment on the status of the complaint and whether Conine is required to report to the state agency.)

The complaint came less than two weeks after Conine’s campaign filed a complaint against Fiore for allegedly failing to disclose a business she started in July 2020 with former council member Ricki Barlow, who later resigned and pleaded guilty, misusing campaign funds.

Her business venture was never publicly announced, and Fiore’s campaign said she “didn’t benefit from it in any way.”

But the complaint is just the latest financial matter to surface in Fiore’s decades-long Nevada political career, which has been marred by IRS troubles and, more recently, an FBI investigation into her campaign finances.

In late 2014, Fiore, then the Assembly Majority Leader and Tax Committee Chair, came under scrutiny after news reports surfaced that the IRS had filed more than $1 million in tax liens against her and her home health care business. Some of these liens date back to 2003.

However, records show that Fiore has never listed the IRS as a creditor on their financial disclosure forms since 2012, the year Fiore was elected to the Nevada Convention.

State law requires a candidate or elected official to disclose a minimum of $5,000 in debt on financial disclosure forms, excluding mortgage or personal auto loans.

More:Fiore’s career has been marked by IRS troubles and FBI investigations. She still wants to be Nevada’s Treasurer.

Fiore, who is now Las Vegas City Councilman, came under fire again after the FBI opened an investigation into her campaign finances, first reported in the Las Vegas Review-Journal.

As part of that investigation, the FBI searched Fiore’s home in northwest Las Vegas in January 2021. In the months that followed, the FBI also served Fiore with subpoenas for documents related to her campaign and political action committee, Future for Nevadans, and openly questioned witnesses at Las Vegas City Hall last July.

Nevada voters will choose their next treasurer during the November 8 general election.

Rio Lacanlale is a Las Vegas correspondent for the Reno Gazette Journal and the USA Today Network. Reach out to her at [email protected] or on Twitter @riolacanlale. Support local journalism by subscribing to RGJ today.