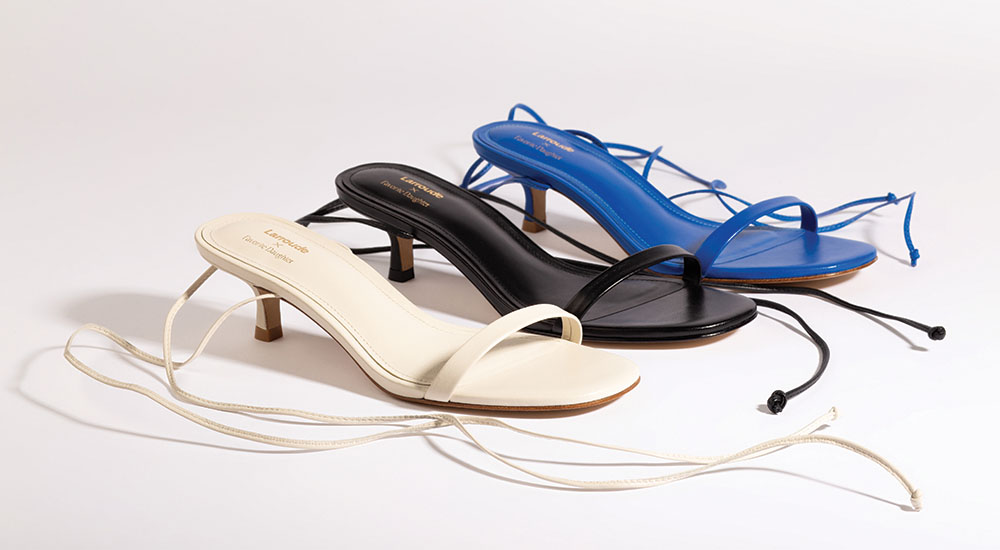 Sisters Sara and Erin Foster may be “Barely Famous” — the title of the VH1 reality show spoof series they created a few years ago — but the comedic writing, acting, and producing duo has established itself as a multihyphenate with a collective Made a name for 1.3 million followers on Instagram.

“It’s not that we set out to be those relatable big sisters you never had,” says Sara, “but we’re trying to give people as much unfiltered life as we can.” I think that’s a big part of the success of our various ventures. Women don’t feel intimidated by us. They feel like our girlfriends.”

The Foster sisters had these loyal “friends” in mind when they created Favorite Daughter, a contemporary clothing line whose name borrows from their sense of humor (they like to joke that they’re the favourite).

“I never thought I would be able to have a fashion brand,” admits Sara, “but the women at Centric [Brands, which owns Hervé Léger and Joe’s Jeans] were so passionate. They said, “Here’s something. You talk to all these women.” They saw it before us.”

Erin adds, explaining that they’re working with a team to encapsulate the brand’s relaxed California-chic aesthetic: “We don’t consider ourselves designers. We’re always thinking about what we need in our lives and what’s not in our closets.” The Favorite Daughter team includes design director Carla Calvelo and her younger sister Jordan Foster, a New York-based stylist who is the label’s style director .

Favorite Daughter was founded in December 2020 and opened its first store in Beverly Hills a year later. A second location in Palisades Village is expected in the fall. The label consists of breezy dresses, denim, sweaters, jackets and blazers, with prices ranging from $45 for logo T-shirts (which say things like “Mom of the Year” and “Favorite Aunt”) to $595 for coats that at shopfavoritedaughter.com.

The company’s latest release, set for release on July 21, is a collaboration with footwear designer Marina Larroudé. It offers a summer collection of strappy sandals in three colorways: black, ivory and electric blue. Erin calls the shoes, which are handmade in Brazil and retail for $275, “a heel that works with jeans, dresses and skirts without being too high and that you can wear day or night.”

The Fosters – whose father is music producer David Foster and mother is former model Rebecca Dyer – dress well but admittedly share an understated fashion philosophy which they apply to their line.

“Sara and I are in a really fashion crowd, and we always felt like outsiders in the fashion crowd because we weren’t the girls who spent thousands of dollars on The Row,” says Erin, whose close friends include jewelry designer Kate Hudson , owned by Jennifer Meyer and stylist Rachel Zoe. “There are actually so many more women who identify with our feelings. That was the intention behind the brand; to create a fashion brand that feels fashionable but doesn’t feel exclusive. It doesn’t feel like, ‘You can’t sit with us.’ It feels accessible. We want to create things that you can wear that feel like you’re wearing a piece that’s a conversation starter but won’t result in not being able to pay rent that month.”

“None of us can imagine spending $800 on a shirt. We just don’t do that. We weren’t raised that way,” adds Sara, who, despite appearances, says, “We’ve always thought of ourselves as outsiders. We always feel like we’re on the other side of the velvet rope.”

It’s a theme the Foster sisters brought to Barely Famous, their Curb Your Enthusiasm-like mockumentary reality spoof that aired in 2015 and 2016. The VH1 show put the sisters on the radar of Bumble founder Whitney Wolfe Herd, who then offered them a gig as Co-Heads of Creative, a role they held on the dating app from 2017 to 2020.

Sara recalls that time: “People in our circle of friends were like, ‘Are you crazy? you are actresses You will have a company job? It’s not going to work, and it’s not going to do you any good in the entertainment business.’ Back then, people said, ‘You won’t be taken seriously as a writer/actress/producer if you do that.’ Cut to: Now it’s 2022 and every single actress is looking for companies to invest in and advise on – isn’t Jennifer Aniston the creative director of Vital Proteins?

Since then, the Fosters have formed Oversubscribed Ventures, an early-stage consumer-focused venture capital firm that includes investments in low-carb wines from Bev, ZenWTR and the Exponent Beauty line. The women also advised fitness company The Mirror, recently acquired by Lululemon. “Erin and I love brand building,” says Sara. “We enjoy the process and it really brings luck.”

But the Fosters haven’t turned their backs on Hollywood. In addition to their podcast, The World’s First Podcast, the sisters have a television development deal with Disney’s 20th Century Fox. Her projects include Shiksa, a Netflix comedy starring Modern Family co-creator Steven Levitan. Erin, who is writing the series with Sara as producer; it is developed as an acting vehicle for both.

“It’s about a girl who has to convert to Judaism and marries a man she wants to be with,” says Erin. It’s inspired by Erin’s 2019 wedding to The Core Entertainment co-founder Simon Tikhman. (Vogue reported on the couple’s Nashville wedding, which was attended by friends Hudson, Zoe, and Jonah Hill.)

Raised in Los Angeles, the Foster sisters appear to have had a place at the forefront of the entertainment industry thanks to their father’s music career. However, they say they often felt like they were looking inside from the outside. “We didn’t feel like we were part of Hollywood at all,” says Sara.

Erin interjects, “We were closer than other people. We grew up in the music business. Our dad always worked so hard and kept his head down and focused on what he was doing.” She says his work ethic and passion influenced her personal travels. “He had no college education,” she says. “He didn’t even graduate from high school. He wasn’t on a clear path and he never pushed us to be on a clear path, but he pushed us to follow our passion. People will say to us, ‘Why didn’t your father ever push you to be musicians?’ First of all, we’re not talented, that helps, but he also said, ‘It’s not really my job. If you are interested in music then you know where to find me. I’m in a studio seven days a week and if you’re passionate about it then come and work in the studio to understand what’s going on there. If that’s not important to you, then get a job in acting or architecture or whatever is important to you. It’s up to you to figure that out and get there.’”

Sara, who started out as a model and actress, says: “We were raised to get a job. You have to work.”

The Foster sisters have applied this mindset to all of their ventures. “We believe in saying yes to things and stretching,” says Erin, “and if it doesn’t work, that’s okay. We believe that every opportunity you take could bring you a step closer, even if you didn’t want to end up where you wanted to.”

The women have only scratched the surface of what they hope to achieve. Erin says she wants to write a book, while Sara is dying to get back to acting. “I miss being funny on TV,” says the latter. “I’d love to do a third season of ‘Barely Famous,’ or find out what the next thing is. People say, ‘I don’t understand. Why isn’t there a third season or a new iteration of this show?’ I don’t have a good answer anymore. I think we’d be kicking ourselves if we didn’t eventually find out what the next iteration is.”

As for their passionate following on social media, the sisters say they’re unsure of what to call their audience. “Our followers? Our friends? Whatever you want to call them – fans? I always feel weird when I say that,” says Sara. “But they feel connected to us.”

A version of this story first appeared in the July 20 issue of The Hollywood Reporter. Click here to login.