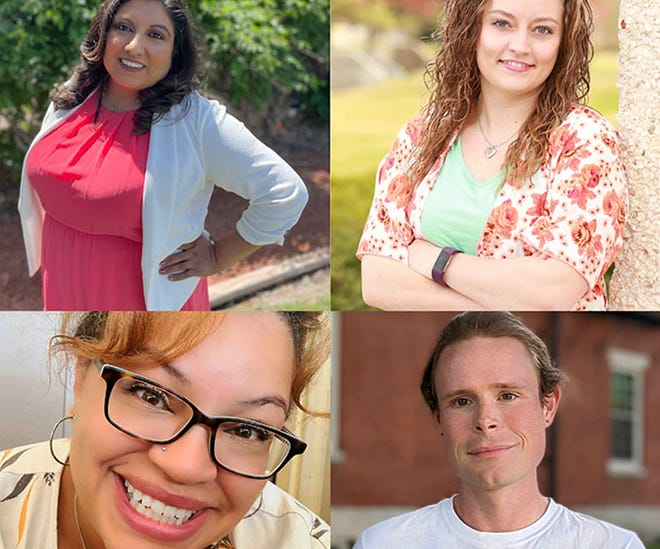 Colorado State University Pueblo will honor four distinguished alumni under the age of 35 on Sunday, October 2 at the conclusion of this year’s homecoming week.

Sarah Meigs, Alisa Proffer, Bianca Hicks and Tyler Bongers are among the winners of the Distinguished Young Alumni Award to be honored at the 2022 Alumni and Young President’s Club Brunch Sunday from 10 a.m. to 12 p.m. in the patio of the Occhiato Student Center. Tickets are $15 and can be purchased on the CSU Pueblo website.

“Our community has so much pride in the leadership of CSU Pueblo and the caliber of the students graduating there,” Hicks said.

Meigs is the operations director of Pueblo’s Court Appointed Special Advocates (CASA), an organization that works to help abused and neglected children.

By age 19, Meigs was a single mother who worked multiple jobs to pay for rent and childcare. Wanting access to higher-paying jobs to support her son, she opted for a college education in business administration. She earned an associate’s degree from Pueblo Community College in 2015 and a bachelor’s degree from CSU Pueblo in 2017. Shortly after her bachelor’s degree, she began working at CASA as the organization’s office manager.

After her master’s degree in 2021, she was promoted to operations manager. That same year, she was named Pueblo City-County Outstanding Woman of the Year by CASA. According to a nomination form submitted by CASA of Pueblo, she intends to pursue a PhD.

“We’re honored to nominate Sarah for exemplifying how a successful non-traditional student can transform her life through education and create a better world not only for herself and her child, but for other families and children in need can create,” says the nomination form.

Proffer is a home caregiver at Parkview Health Systems.

Proffer, the 2014 CSU Pueblo Homecoming Queen, was well known on campus but also worked in Parkview’s Student to Employment Program (STEP), cared for residents at Sharmar Assisted Living, and volunteered at the PAWS for Life animal shelter. She earned her Bachelor of Science in Nursing in 2017. She was also a member of CSU Pueblo’s National Society of Leadership and Success.

She has been with Parkview in some capacity for more than a decade. She started the STEP program in August 2012.

“She remains professional and a role model both as an alumni of the university and the STEP program,” said Stacy Cristelli, Parkview Community Relations program coordinator. “This young lady will continue to shine and make us proud in life. Alisa Proffer has the heart of a servant and will serve her community for years to come.”

Hicks is the vice president of strategic operations for the United Way of Pueblo County.

Hicks, who graduated in Mass Communications in 2008, was a marketing and communications specialist at the El Pueblo Adolescent Treatment Community before becoming director of marketing, events and initiatives at United Way. She was elected Vice President of Strategic Operations in 2021.

“Bianca is always willing to do whatever it takes to improve the lives of many in our community,” said Shanna Farmer, President and CEO of United Way of Pueblo County. “Her selfless dedication and professional accomplishments make her an excellent candidate for this year’s CSU Pueblo Distinguished Young Alumni Award.”

Bongers is a member of the mathematics department at Harvard University.

After graduating in math and physics from CSU Pueblo in 2012, Bongers received his PhD from Michigan State University and postdoctoral research at Washington University in St. Louis. At Harvard, they teach the school’s Introductory Analysis course, serve on the Gender Inclusion in Mathematics Committee, the Bok Peer Observation Program, and the Math Table Seminar.

“As a teacher, my primary interest is in learning how to build inclusive and equitable math communities that support all of our students,” reads Bongers’ faculty page on Harvard University’s website. “I’m also interested in designing more holistic assessments and working with different assessment approaches, such as project-based learning and mastery grading.”

For more information about Homecoming and Family Weekend at CSU Pueblo, visit the school’s website.