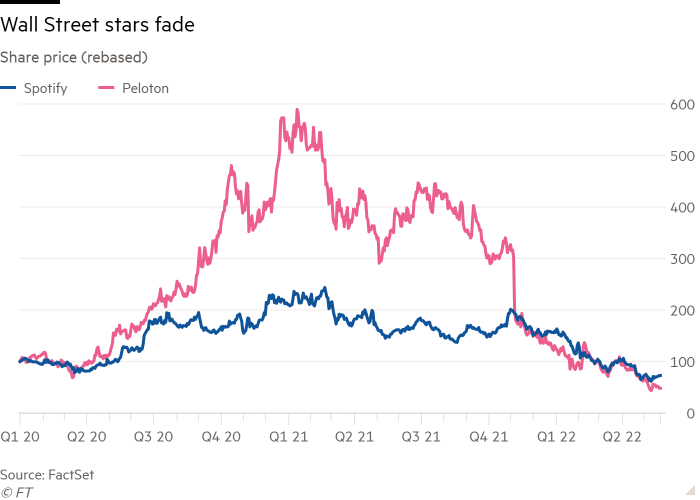 Convertible bonds sold by top-tier tech companies over the past year have tumbled, a clear example of how the turmoil in financial markets has hurt the appeal of some of the pandemic’s stars.

Spotify and Peloton were among a group of companies selling convertible bonds, a type of bond that can be converted into shares, at the top of the market. However, these bonds are now falling in price as the prospects dim that the companies’ stocks will reach the high levels needed for the debt to be turned into equity.

The decline in convertible bonds underscores the abrupt shift in market sentiment away from assets, which thrived during the financial markets boom from early 2020 through January of this year.

U.S. stocks briefly slipped into the bear market last week, with the blue-chip S&P 500 index falling 20 percent from its record January high, while stocks of companies whose valuations were biased towards big gains for years to come have fared much worse.

The dips have come as the Federal Reserve this year began reversing stimulus measures, including historically low interest rates, that have helped lift financial markets from the depths of the coronavirus crisis to big gains.

Tech issuers, fresh out of a pandemic-driven surge in their share prices, had flooded the market with convertible bonds in 2021 – often capitalizing on their popularity with shareholders by offering no coupon at all, meaning they didn’t have to pay interest on the debt.

“It became somewhat fashionable to go out and have a zero-coupon bond created,” said Craig McCracken, co-head of equity capital markets at Wells Fargo. “What are the two most important things that have changed? The first is the rise in interest rates and the second is the fall in stock markets.”

Convertible bonds initially look similar to other corporate bonds. But they include a preset price at which investors can choose to convert the debt into equity. Companies are typically attracted to this type of debt because it allows them to avoid diluting other shareholders until their stock price has risen high enough to trigger the conversion.

The debt also typically comes with lower borrowing costs in exchange for bond investors gaining access to higher, equity-like returns when the company performs well. Investors buy the debt securities because they allow them to convert them into equities when prices rise while limiting the potential for loss if the stock market’s ascent falters.

In February of last year, home fitness company Peloton raised $1 billion with a zero-coupon convertible bond. On the day of the sale, the company’s stock price closed just under $150. The bond was sold with a strike price of nearly $240 before investors could convert into shares, marking another rise of more than 60 percent at the time. But the stock has now fallen to less than $14. By maturity in 2026, it would have to rise by around 1,600 percent to trigger the conversion price.

Spotify, whose shares are down more than 50 percent this year to $109, sold its zero-coupon bond in late February last year with an exercise price of $515. Consumer lender Affirm sold one of the last zero-coupon bonds of the year in November, within weeks of its share price hitting a record close of $168.52. It’s since fallen to less than $25, well below its conversion price of just over $215.

In each case, the value of the convertible bonds has fallen to reflect the declines in the stock markets. Affirm’s bond is now trading at about 60 cents against the dollar, while Peloton’s has fallen to 70 cents. Spotify’s bond has fared slightly better, falling to 80 cents.

Investors found that the bond declines paled in comparison to the price declines at some companies.

A number of other zero-coupon convertible bonds issued over the past year have also fared better. Ford sold a convertible bond with an exercise price of just over $17 in March last year. Since then, shares have hit a closing high of $25.19 before falling back to around $12 this year — the share’s price when the bond was issued.

“The idea of ​​convertibles is to win without losing,” said Tracy Maitland, founder of Advent Capital, which focuses on convertibles. “Peloton stock may never go up again, but if I can stay in the convert for a few more years, at least I’ll get my money back.”