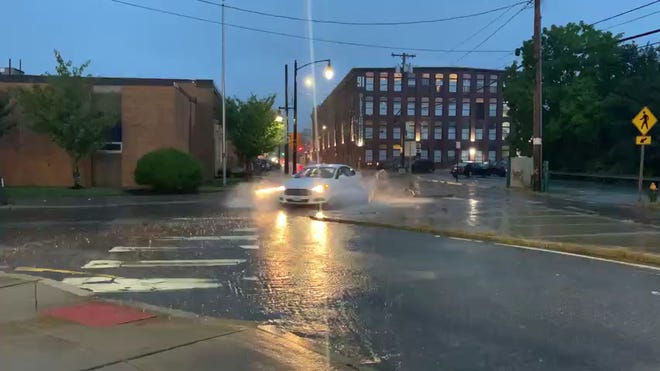 After an afternoon of torrential downpours, several roads and highways in and around Providence were flooded.

Continuous rain is forecast until Monday night, Tuesday and Wednesday.

Flood warnings are in effect for Northern Rhod Island, Kent and Washington counties until 10:30 p.m., according to the National Weather Service.

The Providence Journal reports on the issue on Tuesday.

What to know on Tuesday:The governor warned residents to stay off the streets Monday night

How Much Rain Did Rhode Island Get?:Here is the breakdown by municipality

Flood water lingers along the streets of Providence, Rt. 10 covered with mud

Video of streets in Providence shows water still covering the streets as the rain continues into the night.

After being closed for several hours, Rt. 10 is open again, but portions of the road are covered in silt and mud from the previous flooding.

“Flash flood warnings are still in effect and we urge you to keep roads off for non-essential travel. RIDOT, RIEMA and the RI State Police are working to keep the streets clear of obstructions.

Stay healthy and try not to drive through the puddles. Our office will continue to release updates as they become available.”

A nationwide flood warning is in effect for the counties of Kent and Washington until 9:30 p.m. Monday evening.

Rain is forecast to continue through Tuesday.

“The most important thing Rhode Island residents can do in any form of emergency is stay off the streets … as evening approaches and it gets dark, you won’t see the flooding on the streets,” he said. “You won’t see any debris … I know it may seem like the storm has slowed, but we expect there could be another wave.”

McKee said over 4 inches of rain fell over Providence and the surrounding areas in a short period of time. Rhode Island State Police have moved stuck vehicles off freeways such as I-95 and Rts. 10 and 6, and there are about 600 reported blackouts, mostly in Johnston and Lincoln.

Rhode Island Department of Transportation Director Peter Alviti also spoke during the press conference and said the highway closures were due to drainage systems becoming overwhelmed.

“It wasn’t a blockage, it was just that the rain was falling at an intensity beyond its capacity to absorb,” Alviti said of the drainage systems, adding that crews had taken precautions and checked inlets to make sure they were working were free from clogs before the storm.

Mayoral candidate Brett Smiley took advantage of the city’s structural problems, exacerbated by the weather, to deliver a campaign message to the media Monday night.

On Atwells Ave. near Bowdoin St. a patched section of road gave way and crumbled due to continued rains.

“That’s what happens when we don’t hold suppliers accountable, when people don’t do their jobs and when we have a city government that doesn’t focus on basic infrastructure,” Smiley said, arguing that the city didn’t exercise proper oversight

“What is really frustrating in moments like this? [is] It’s not that we don’t pay, it’s that we don’t get anything,” said Smiley. “I have no reason to believe that the city has come cheap with this work. The problem is that the vendor responsible for the patch didn’t do a good job or the permanent patch didn’t come out on time.”

Providence Water surfaced after the road collapsed to solve the problem.

Shortly after Smiley’s press conference, one of his opponents, Councilwoman Nirva LaFortune, called him on Twitter.

“We need leaders who take responsibility,” she wrote. “If you, as the city’s chief operating officer and chief of staff to the mayor and governor, don’t get the basics right, then what will? We need change and a mayor who invests in Providence. No more of the same.”

Crews were seen on Atwells Avenue beginning to tear up the sidewalk and lay sheet metal before applying a more permanent repair for the street.

I-95 at Thurbers Avenue and exit 18 has reopened after flooding cleared.

Multiple reports on Twitter indicate that Route 95 South has reopened while vehicles on 95 North are still waiting with the lane closed.

Motorists have been stuck in traffic for more than two hours.

Roads around Providence closed due to flooding:

Providence Police closed the following streets as of 2:50 p.m. This list will be updated as more roads close or open:

A Cranston resident recorded the flooding outside his home on Columbia Avenue.

The video, posted by Michael Cameron on Twitter, showed the roadway underwater, obscured from view.

“This has been a problem for the 13 years that I have lived on Columbia Ave in Cranston. More flooded cars, blown manhole covers (so dangerous!) Let’s fix this.”

A building collapses in Providence due to heavy rain

An unoccupied building collapsed early Monday night at 215 Peace Street in Providence, near the intersection of Waverly and Dexter streets, according to Providence Police.

There were no injuries.

Multicultural TV’s Energy Gamers: Bringing Range to TV Screens All over the place