AUSTIN (KXAN) – A Proud Boys chapter in Central Texas is just $624 short of what it needs to outfit its members with “masks, shields, armpads [sic] and radios,” the chapter’s crowdfunding posting shows.

The Proud Boys want to use the gear to “assist with coordination and protection,” according to the fundraiser’s organizer, CJ Grisham.

“This is NOT a fundraiser advocating violence. Rather, it is a fundraiser to prevent violence or defend ourselves from it. We have NEVER advocated nor will we ever advocate offensive violence of any kind,” Grisham said, adding his group has been “under attack by antifa, by the left.”

The crowdfunding post is hosted on the “GiveSendGo” fundraising site, which describes itself as the “#1 Free Christian Crowdfunding Site.” The post was active sometime before the Jan. 6 attack on the U.S. Capitol building, but the post does not have an exact date.

Keep track of all U.S. Capitol attack prosecutions at this link

Grisham declined to give a specific number of members of his chapter. “I’ll just say we have enough to be relevant and successful,” Grisham acknowledged. 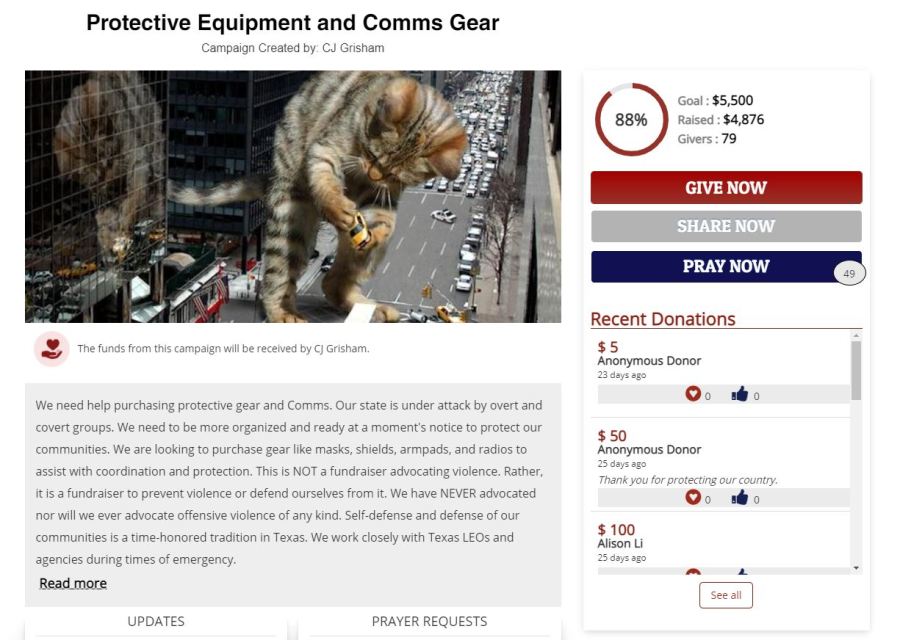 This screenshot from the GiveSendGo crowdfunding website shows the Central Texas Proud Boys chapter’s progress toward a $5,500 fundraising effort.

Grisham dismissed the presumption that his fundraising effort was an attempt to militarize the Proud Boys chapter.

Sam Lichtenstein is a global security analyst with Stratfor, an organization that describes itself as “the world’s leading geopolitical intelligence platform.” Lichtenstein specialized in assessing terror threats. He said he doesn’t believe Grisham’s fundraising effort is as innocent as he’s portraying it.

“If you have an individual that’s promoting the kind of purchase of this equipment in ostensibly a defensive posture, that’s certainly legally allowed under our current set of laws and there’s nothing inherently concerning about that behavior,” Lichtenstein said. “However, when you combine that information with what we know about other Proud Boys affiliates, members and the general and sad tragic direction of the threat right now, then it does become a little more concerning,”

“Because you have to, of course, wonder what someone needs this for in the first place if they’re not going to be going to these protests in anything short of a violent capacity or at least preparing for the threat of violence should it happen,” Lichtenstein said.

Just weeks ago, the Southern Poverty Law Center released its “Year in Hate and Extremism 2020” report where the SPLC likened the Proud Boys to the Ku Klux Klan.

“Despite the massive drop in Klan groups, there are now numerous, alternative hate groups that make Klan membership obsolete,” the SPLC wrote in its report published Feb. 1 and posted to its website. “The Proud Boys, for example, vandalized historically Black churches in Washington, D.C., during a pro-Trump demonstration in December, and its members were aggressively front and center during the attack on the Capitol,” the SPLC wrote.

The SPLC, based in Montgomery, Alabama, is a non-profit that describes itself as an “organization monitoring the activities of domestic hate groups.” 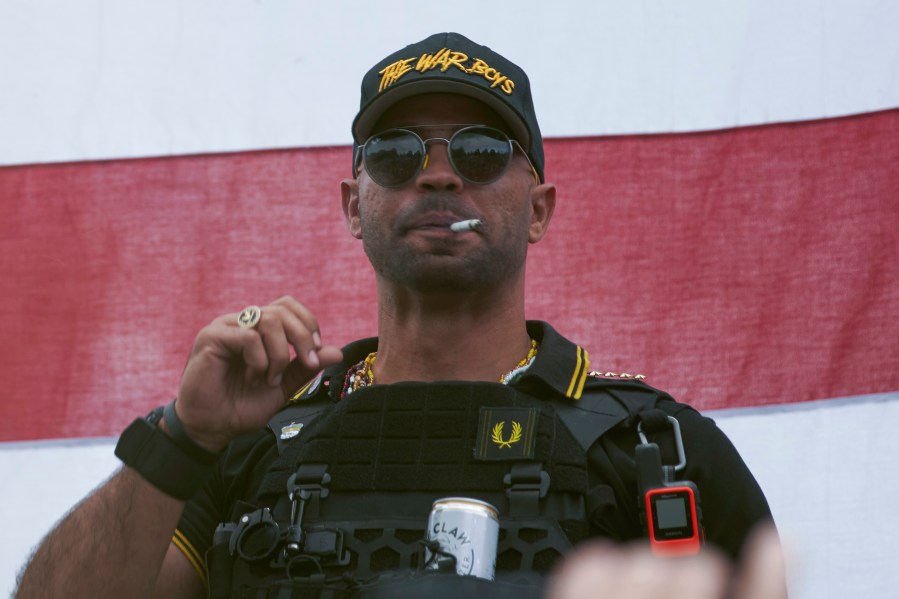 “It’s kind of miraculous that the Proud Boys pull down a sign or a poster and suddenly we’re defacing churches. That’s kind of a stretch for the SPLC,” Grisham said.

According to Nexstar sister station WDVM, the church has sued the Proud Boys in connection to the vandalism of signs on its property.

KXAN contacted the SPLC multiple times to request an interview, but the organization did not return multiple emails or phone messages.

On Feb. 3, the Canadian government added the Proud Boys to its list of terrorist groups. Canadian Public Safety Minister Bill Blair announced the decision in a video recorded statement.

Yesterday, we announced the addition of 13 groups to the list of terrorist entities in Canada, including 4 ideologically-motivated violent extremist groups ⬇️https://t.co/BtiglwReR2

The Proud Boys are one of 13 groups added to the Canadian government’s list on Feb. 3. The other groups include The Attomwaffen Division, the Base and the Russian Imperial Movement.

“It’s no longer about speech, it’s about violence and it’s about extremism and it’s about terror. And in my opinion, based on the totality of evidence that our national security intelligence organizations and law enforcement have gathered, also that we have obtained from our international Five Eyes partners, particularly from the United States, I think provides us with an overwhelming preponderance of evidence that the activities of that organization now meets the threshold of a terrorist entity and that’s why we’ve listed it,” Blair said in the public announcement.

CJ Grisham, who identified himself as a member of the Central Texas Proud Boys chapter defended his fundraising effort in this Feb. 2, 2021 interview with KXAN.

Grisham, who said he doesn’t speak for the national Proud Boys organization, said his group is not racist and did not condone violence.

“We’re not violent, but we can be violent. Really what happened was we went from a men’s drinking club to a group that had to stand up to antifa,” Grisham said.

“That may be this individual’s personal opinion, but that’s not what we see when we look at the group in general. When you actually kind of pull that away, it very quickly fades into the reality that first of all, these individuals show up at a lot of protests, either with some sort of weapons or already kind of threatening violence in advance,” Lichtenstein said.

The U.S. Department of Justice announced charges against multiple members of the Proud Boys following the Jan. 6 Capitol attack. The latest happened Feb. 11, when the DOJ announced federal charges alleging five additional people participated in a conspiracy related to the attack.

The total number of people federal prosecutors charged in connection to the attack has climbed to more than a dozen.

In charging documents released Feb. 11, the Justice Department announced charges of conspiracy, civil disorder, obstruction of an official proceeding, threatening to assault a federal law enforcement officer, knowingly entering or remaining in any restricted building or grounds without lawful authority and disorderly conduct on Capitol grounds against five additional suspects.

The five were marching with a group led by Proud Boys organizers, according to the charging documents, and were near the front of the line when the crowd came face-to-face with Capitol Police officers at barricades set up around the Capitol.

Chrestman was captured on video threatening to kill federal officers, according to the FBI’s Feb. 11 affidavit.

“Was that condoned by the Proud Boy movement or were these actors acting outside of the greater organization?” Barr asked Grisham.

“This is no different than if some of the people who went into the Capitol were bakers or accountants,” Grisham said. “That doesn’t indict the entire baker core of people who are bakers.”

“They weren’t there representing the Proud Boys and that’s all I can say about that. I don’t know what the Proud Boys as an organization is doing about that, if they’re condoning or not, but I know that many in my chapter, we try to convince people not to go to the Capitol because it’s just going to get ugly,” Grisham told KXAN.

Long before the Jan. 6 Capitol building attack, the Proud Boys were on the FBI’s radar. An unclassified FBI document shows the agency was investigating the group as far back as December 2017. 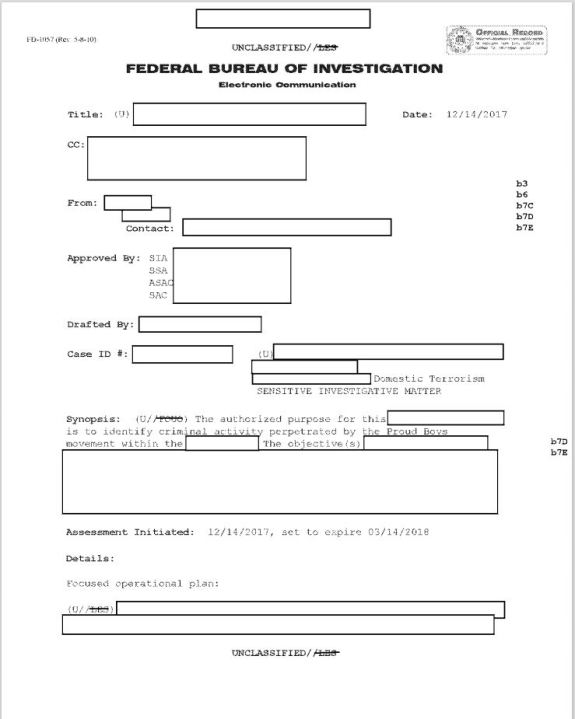 This is one of two pages released by the Federal Bureau of Investigation under a Freedom of Information Act request showing a 2017 – 2018 investigation of the Proud boys. (FBI Vault FOIA publication)

The document, once classified, is titled “Electronic Communication” and is dated Dec. 14, 2017. FBI records show the original document was eight pages long, but after heavy redactions, the records the FBI made public totals only two pages.

“The authorized purpose for this [redaction] is to identify criminal activity perpetrated by the Proud Boys movement within the [redacted]. The objective(s) [redacted paragraph], is what is shown under the FBI’s synopsis portion of the records,” it states in part.

The second page is titled “Identified Members of Proud Boys” and dated Feb. 9, 2019. Every word in each field is redacted except one showing “Domestic Terrorism SENSITIVE INVESTIGATIVE MATTER” and a field titled “Details,” which contains this portion of a heavily redacted paragraph: “On 18 December 2017, writer received information from the [redacted] Field Office [redacted paragraph.]

“When we’re looking at what the Proud Boys as a whole are doing as an organization, I don’t think from a strictly legal point of view that the entire group merits the definition of a domestic terrorist group,” Sam Lichtenstein told KXAN. “However, if you look at what some individuals that are associated with the movement are doing, I do think you have a much stronger legal base to say that they do meet that threshold for conducting domestic terrorism.”

We asked the Texas Department of Public Safety whether the agency has labeled the Proud Boys in any threat assessment, but the agency did not provide a response. DPS is asking for $40 million additional tax dollars to help combat what it described as threats to the Texas Capitol from groups DPS characterized as “domestic terrorists.”

The Patriot Act lists definitions for what domestic terrorism is, which the United States Code defines as “an act dangerous to human life,” that happens inside the “territorial jurisdiction of the United States.”

The act must meet these three elements of intent to meet the definition: intimidate or coerce a civilian population, influence the policy of a government by intimidation or coercion or to affect the conduct of a government by mass destruction, assassination or kidnapping,” according to Title 18 of the United States Code.

“If you look at the individuals there at the US Capitol, I think it’s safe to say that they were seeking to intimidate or coerce a government policy; they were explicitly there to try to prevent the certification of President Joe Biden. That would be literally what they’re doing was trying to intimidate and coerce and clearly, tragically, there was a high-risk of violence that actually has led to fatalities,” Lichtenstein said. 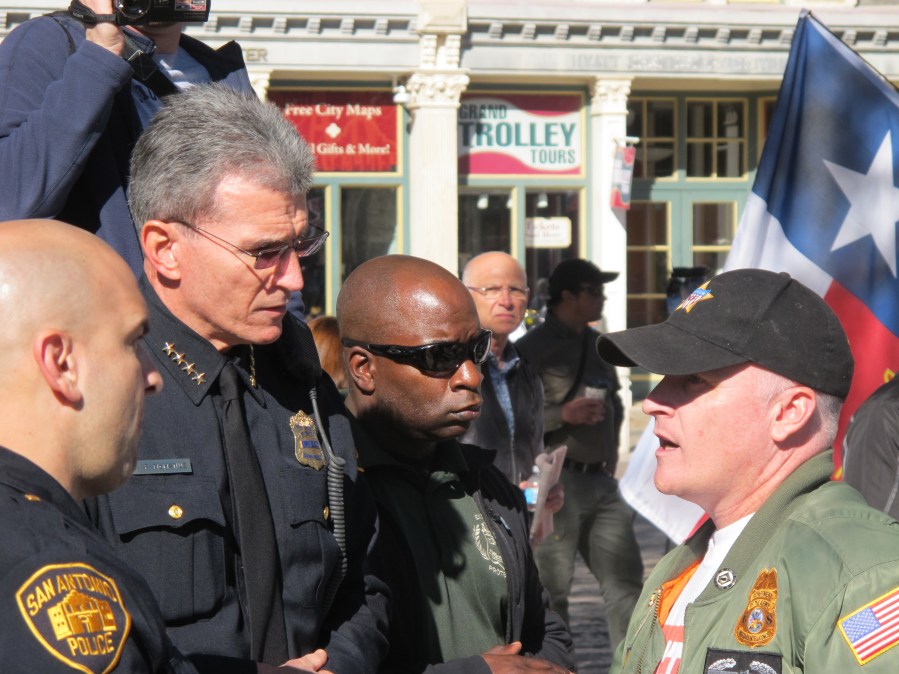 San Antonio Police Chief William McManus, left, speaks with C.J. Grisham, right, president of Open Carry Texas, one of the organizers of the “Come and Get It San Antonio!” rally at the Alamo in San Antonio, Texas on Oct. 19, 2013. (AP Photo/Christopher Sherman)

Grisham, who lives in Temple, Texas, contends Proud Boys chapters like his are simply fraternal organizations “of men where men can go and just be men.”

“We can tell dirty jokes without offending somebody, it’s a place where you can express your opinion without fear of being judged and be proud of the fact that that we’re men and right now all across the country, manhood has been under attack. It’s being emasculated. Being a man is somehow toxic all of the sudden. We believe in venerating women, but it’s just a place where we can have our little enclave just guys being guys and hang out with each other,” Grisham said.

Biden is given the chance to transform an essential federal courtroom: NPR