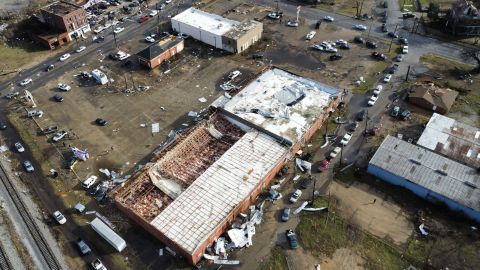 Alabama Governor Kay Ivey said Thursday night there were six deaths in the state after the storm.

“I am saddened to learn that six Alabamaans were lost to the storms that devastated our state. My prayers are with their loved ones and communities. We are far too familiar with devastating weather, but our people are resilient. We will get through it and be stronger for it,” the governor said in a tweet.

The severe weather outbreak, which spawned more than two dozen tornadoes in the South, has resulted in five deaths in Autauga County, Alabama, the coroner said Thursday night.

Autauga County Coroner Buster Barber gave CNN the updated number after previously saying, “We have multiple deaths and are still looking for bodies.”

Autauga County is just east of Dallas County, where a huge tornado swept through the town of Selma on Thursday afternoon. The twister was likely down for at least 50 miles, causing damage in seven counties across the state, National Weather Service meteorologist Gerald Satterwhite told CNN.

“It was a fairly significant tornado” with “debris being lifted into the air at about 10,000 to 15,000 feet,” Satterwhite said.

The long-track tornado was likely an EF-2 or EF-3, he added. It was one of at least 30 tornadoes to hit the United States, according to the National Weather Service’s Storm Prediction Center.

The damage in Selma is widespread, said William Alan Dailey, a Dallas County coroner who is also a paramedic. The damage is going from “one side of Dallas County to the other,” he said during a video press conference.

He said there were no deaths but that any injuries were being taken to Vaughan Regional Hospital.

What appeared to be a giant funnel cloud passed through the area, according to images provided by Mike Pitts. After it was over, Pitt’s pictures showed houses without roofs, others without clapboards, and streets blocked by piles of rubble.

The storm “tore apart” the home of Selma resident Krishun Moore, but no one was hurt, she told CNN. She took shelter with her mother in a bathroom.

“All we heard was wind and the whole house was shaking,” Moore said.

Photos shared by Priscilla Lewis with CNN show downed utility poles, debris strewn on the street and severe damage to at least one building.

Other photos, taken by Kenneth Martin, show the damage from the air. One shows a large building that appears to have a large roof collapsing.

Deborah A. Brown told CNN she was at a downtown tax office when she believes the tornado was coming down Broad Street.

In a Facebook video posted after the storm, Brown can be heard telling people how blessed they and others were there.

“We could have gone, y’all,” she says, pointing the camera at an SUV with smashed windows. “We had to take cover. We had to run and jump in the closet.”

Brown’s video shows a huge pile of debris pulling down power lines. In the alleyway next to the building she was in, part of a wall of the building next door appears to have collapsed into a heap.

Selma, a town of about 17,000 about 50 miles west of Montgomery, is the scene of a landmark civil rights march in 1965 in which protesters on the Edmund Pettus Bridge were beaten and tear gassed by police, an incident known as the “Bloody Sunday.”

“It’s a disaster area. Power lines are down and trees are down — it’s really dangerous,” Dallas County Probate Judge Jimmy Nunn said during the press conference. Nunn said inmates at the county jails are being sent to other facilities.

More than 147,000 customers in Alabama, Georgia and Tennessee were without power as of 7:30 p.m. ET, according to PowerOutage.us.

The governors of Alabama and Georgia each declared states of emergency for parts of their states.

Damage reports piled up in the Southeast and Ohio Valley Thursday as the storms progressed.

In Morgan County alone in northern Alabama, a Thursday morning storm caused 10 to 15 injuries – none of which are considered life-threatening – and damaged numerous buildings, said county sheriff’s spokesman Mike Swafford.

Roads and fields were littered with debris and downed power lines in Decatur, a Morgan County township about 25 miles southwest of Huntsville, images from city police and the county sheriff’s department showed.

Siding has been demolished from a Decatur hotel, pictures show of hotel guest Mark Spychala, who said he was hiding in a laundry room when the storm hit Thursday morning.

Several preliminary tornado reports were made in Alabama in the morning, including in Winston County in northwestern Alabama and Sumter County in western Alabama, where damage to buildings was reported, the weather service said.

Downed trees and power lines have been reported along several roads in Winston County, whose communities lie dozens of miles northwest of Birmingham.

“Motorists are urged to only navigate roads in emergency situations and to remain aware of the weather,” the Alabama Law Enforcement Agency said in a series of tweets about the damage in Winston County.

In Monroe County, northeast Mississippi, several rural buildings lay flattened or badly damaged after a storm swept through Thursday morning, according to video tweeted by the Mississippi Emergency Management Agency.

According to the agency, no injuries were reported there, a tornado could have caused the damage. The weather service said that strong winds caused damage in the county.

Wind damage to trees and buildings was also reported elsewhere in parts of Mississippi, Alabama and Kentucky before noon, the weather service said.

In Georgia, a possible tornado damaged Griffin High School in Griffin, south of Atlanta. Trees fell and there was a leak in the gym, said Adam Pugh, spokesman for the Griffin-Spalding School District.

Not a single New 12 months’s decision

Is espresso the most affordable fats burner?