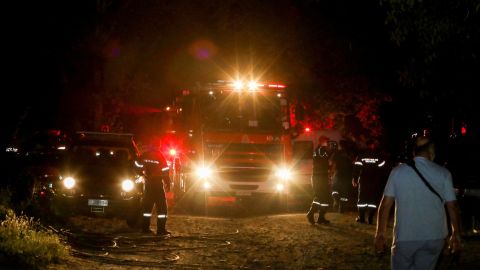 A cargo plane crashed in northern Greece on Saturday, killing all eight people on board and raising concerns about Serbian military equipment it was transporting.

The plane was transporting equipment, including glowing mortar shells and practice shells, to Bangladesh when it crashed near Eleftheroupoli in the northeastern Kavala region, Serbian Defense Minister Nebojša Stefanović said, according to Reuters. He added that all eight crew members were killed.

According to Greek public broadcaster ERT, the plane was carrying “dangerous cargo”. Smoke and intense heat, as well as a white substance found near the crash site, raised concerns about possible toxicity, said Marios Apostolidis, a major general in the Hellenic Fire Brigade.

It was en route from Serbia to Bangladesh via Jordan when it crashed, Ukraine’s Foreign Ministry spokesman Oleg Nikolenko said on Facebook on Sunday. Engine damage is suspected to be the cause of the accident.

The Hellenic Fire Brigade said 15 firefighters and seven pieces of equipment were at the scene of the crash. A drone will be used to survey the area where the plane crashed to assess its safety, Apostolidis added.

Experts are also working to determine what the white matter is and how toxic the scene is before proceeding with the recovery work. Authorities have yet to recover the plane’s flight recorder.