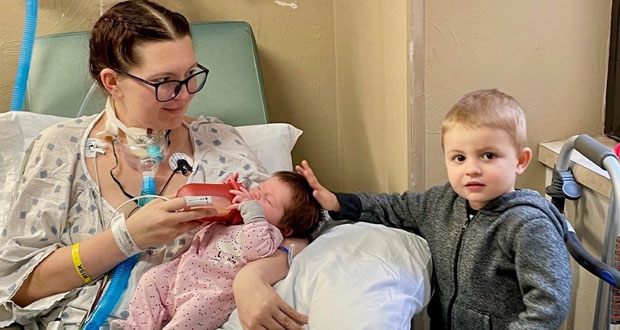 Courtney Elliott is recovering with her newborn daughter and 3-year-old son by her side at the Mercy in Oklahoma City. (Photo courtesy)

The young woman’s serious condition was triggered by a massive blood clot, a complication of COVID-19, which she contracted when she was 36 weeks pregnant. According to reports that day and over the next nine weeks, more than 100 Mercy employees from 21 hospital departments would have to work together to save Elliott’s life not just once, not twice, but thrice.

Elliott’s story began on New Year’s Day 2022 when a home COVID-19 test confirmed that the body aches, fatigue and shortness of breath she was experiencing were not simply the result of a late-stage pregnancy. She initially monitored minor symptoms at home, but over the next week her breathing had become so difficult that her gynecologist, Dr. Jennifer Strebel, determined that delivering her baby as soon as possible would be the safest option.

“She was really having trouble breathing,” Strebel said.

The crisis appeared to be over after the birth of a healthy 7-pound, 7-ounce baby girl on Jan. 12.

“Her shortness of breath had gone, she was able to breathe and walk on her own, and she continued to improve over the next five days until we felt it was safe for her to go home,” Strebel said.

The health scare wasn’t over, however, according to a Mercy publication.

“I was so happy to be home and enjoying my newborn baby and all of a sudden I felt like I couldn’t breathe again,” Elliott said.

Within 48 hours and amid a highly contagious omicron wave of COVID-19 that was stretching hospitals to the limit, Elliott was in an ambulance en route back to Mercy.

“When she got to the ER, her oxygen level, which was supposed to be 92% or more, was at 45%, which I really didn’t know was possible for someone who was still awake and talking,” Strebel said.

Her care team tried everything they could to keep Elliott off a ventilator, using multiple oxygen delivery systems to support her lungs. However, after a week she continued to deteriorate and was transferred to the intensive care unit.

“She had a terrible cough and the work she put into breathing before the intubation was such that she lost 30 pounds in a couple of weeks,” Strebel said. “She couldn’t eat because she couldn’t do anything but work to breathe.”

The new mother eventually had to be intubated and put on a ventilator.

“Her blood pressure dropped so low that the nurses intervened immediately, but everything we tried to do medically didn’t work,” said Dr. Maroun Tawk, the medical director of the intensive care unit. “She was too ill and unstable to get the kind of imaging needed for a definitive diagnosis and there was no time to lose.”

dr Aaron Graham, an interventional radiologist, was finally able to confirm that a massive bilateral pulmonary embolism had caused complete obstruction of blood flow in Elliott’s heart and both lungs. Her family was told that she had a minimal chance of surviving a procedure to remove the clots.

“She died on the table,” Graham said. “I wanted to pull out the clot in her heart and her heart just stopped beating. The ICU nurses rushed in to start the compressions but I yelled ‘Stop!’ I knew I had to get the blood moving again. As soon as I was able to get some of that clot out, her heart started right back up and it was a mad rush to pull out as much of the remaining clot in her heart and lungs as possible.”

Elliott survived the procedure. She returned to the intensive care unit to recover, but days later her coughing led to a collapsed lung that caused her heart to stop beating again. Intensive care unit nurses rushed to perform chest compressions to save her life. Days later, however, her lungs collapsed again and her heart stopped a third time. Again, the ICU team saved her.

A tracheostomy was performed to install a breathing tube down Elliott’s neck, and after five traumatic weeks in the hospital, she finally began to see lasting improvement. She was sedated and doesn’t remember much of those harrowing days, but vividly recalls a conversation with God.

“I remember telling God I’m not done yet,” Elliott said. “I have a little baby and a 3 year old at home. I need to raise my babies and watch them grow.”

Courtney was transferred to Mercy Rehabilitation Hospital in Oklahoma City where she learned to walk again and focused on regaining her independence and strength. She was thrilled to return home in March and thanks the large team of Mercy employees who worked together to save her life.

“I believe God was working through the hands of all of these nurses, all of these doctors, the therapists, the surgeons,” Elliott said. “Without her, her skills and knowledge, I would not be here and my children would not have a mother.”

Five months after her COVID-19 diagnosis, Elliott is home, healthy and living a normal life, taking care of her family and making up for lost time.

“There’s a lot of God in that, a lot of miracles, but also a lot of hard work and beautiful, bright minds who worked so hard to solve every problem they had,” Strebel said. “Nothing seemed too big for them, and it wasn’t.”